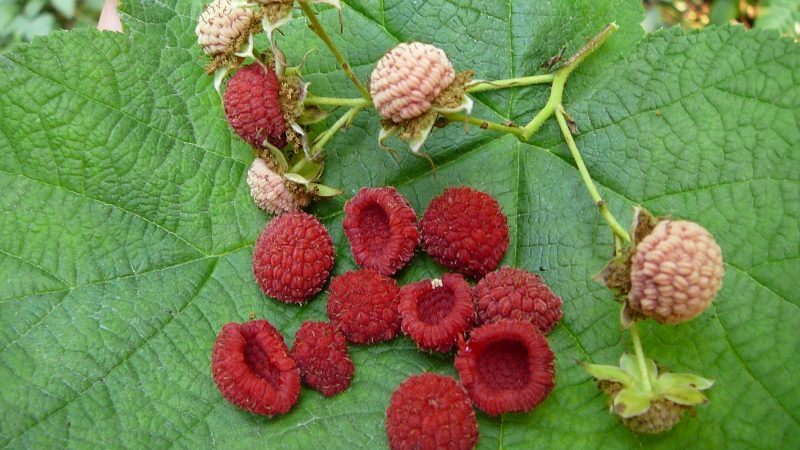 It’s a beautiful Upper Peninsula Saturday morning in late July. I’m walking along an old logging road in Marquette Township, fending off mosquitos, wasps and bees in search of my quarry.

Even though I’m sweating, tired and sore from a couple of hours of bushwhacking, I still have a big smile on my face. The reason why is that it is thimbleberry season–a time of year celebrated by residents of the shores of Lake Superior.

The season is just beginning as most of the berries are yet to be ripe, yet there are tons that are ready to be picked and I swivel and stoop in place picking the ones that are the deepest red. With so many already ripe, there is no need to take the slightly-pink ones. Leave those for the next person, animal or insect.

Better yet, let them drop to the ground and make more thimbleberry plants.

After a couple of hours, and two large quart containers full of already-gushing berries, I head back to the car with the plan to come back tomorrow. There are simply more berries than I could pick in a week of stomping through these woods. And like I said, leave some for the next person.

If you’ve never heard of thimbleberries, you are not alone. Unless you grew up around the Upper Great Lakes region, or in the Pacific Northwest or Rockies, you probably wouldn’t have come across them.

If you look at a habitat map of the United States, you will see that thimbleberries grow in many states, but not in the concentration that they do around Lake Superior or the mountain regions of the west.  The reason for this is that they grow best in a certain type of microclimate that has cold, snowy winters and temperate summers.

That is why you will mostly find them in the foothills of the Rockies and Cascade Mountains and the Lake Superior Region.

I’m not sure how important thimbleberries are to the folks out west, but in the Upper Peninsula and Lake Superior region, they have become more than just a berry you casually pick on a hike. Their popularity as a fruit for jams and desserts has made thimbleberry picking a cottage industry for artisan jam retailers and a ritual among those who love to forage for berries in the U.P.

The season begins in late July, overlapping with blueberry and raspberry seasons in the region. Where those berries can be found in most parts of the Great Lakes and beyond, thimbleberries are rarer and grow in specific pockets that can be hard to find if you don’t know where to look.

One reason that thimbleberries are so popular is they are downright delicious. Right off the plant, they are incredibly juicy and flavorful.

They are also very tart, which isn’t always to some people’s taste, but makes them ideal for making jams, pies and other baked goods. The tartness tempers the added sugar creating a perfect balance of sweet and sour.

Though the plants often grow along roads and bike paths, and even along open hillsides, those plants often do not bear an enormous number of berries because they receive too much sun. Thimbleberries need both sun and shade. They are a truly temperamental plant and berry. This is why when walking through the forest you will find one group of bushes bearing a great many berries and another none at all.

One of the great advantages of picking thimbleberries is that they often grow at chest height or above, so there isn’t as much need for kneeling or stooping like with blueberries. Also, because they are quite large, a picker can get a cup of juicy thimbleberries much quicker than most other berries.

Ripe thimbleberries take hardly any effort to pick off the plant, since they are usually ready to drop off on their own. In fact, my general rule is if it takes effort to pull it from the plant, leave it alone and go on to the redder ones. Leave that one for the next person.

You can probably sense a theme here with my conscientiousness about not over-picking the berries.

It’s not because I’m an overly generous person, it’s just that I feel berry picking, like mushroom hunting or ramp gathering, needs to have an etiquette that respects not only other pickers but also the health of the habitat.

Where thimbleberries do grow in great numbers along the shores of Lake Superior, growth in the popularity of the berries, tourism and development of forestland could potentially threaten the population.

An example of the development growth that is affecting habitats happened recently in the U.P. For several years, I had a favorite spot where I picked blackberries. Where thimbleberry bushes grow profusely in this part of the U.P., blackberry brambles are rarer.

However, a few years ago I returned to the bramble to see how it was shaping up for later in the summer, only to find it had been destroyed by the development of a new campground. There definitely is a need for a new campground in the area to accommodate increasing tourism and with a growing summer population, there is a more need for housing and recreational facilities.

This is pushing development into areas that had largely been left alone since the logging days and where flora like wild berries flourish. Several planned building and housing developments in Marquette are in areas where thimbleberries thrive and are regularly picked.

I believe that just as we protect animal habitats, we need to be concerned about the habitat for plants like berries as well. Part of the reason is that they play an important part in healthy forest ecosystem, but also because berry picking, in particular thimbleberries, is part of the fabric of the U.P.’s culture.

Even before Europeans settled in the U.P., the Anishinaabeg foraged the region’s native berries to supplement their diet. Generations of “Yoopers” have followed suit, and in some cases, have made extra money selling jams made from their summer harvests.

Thimbleberries are the most prized because of their rarity outside the area and, therefore, they fetch the best price (American Spoon sells 9 oz. jars of thimbleberry jam for $25!). However, this jam-based cottage industry itself may put stress on thimbleberry populations if they are over-picked.

As I pick the berries, I wonder if this patch will survive the next 20 years of growth and development in the area.

Will my children be able to bring their children to pick as I did with them? It saddens me to think that this precious resource that seems so abundant now, may be even rarer in the future.

How will this affect the culture and way of life of future Yoopers? It reminds me that we once believed that the virgin forests in the U.P. were inexhaustible. Within 50 years of logging, they were nearly all gone and the forests that have regrown are full of invasive trees and plants, pushing out the native species.

My hope is that this does not happen to the thimbleberries, as land in the U.P. becomes more lucrative and precious.

The next day, I return to my favorite thimbleberry patch. It starts to rain and continues to do so for the next couple of hours, but it does not deter me from my task.

For as much as I love thimbleberries, I find the act of picking them very therapeutic. The “zone” that I get into is meditative. There in the woods, I escape from the world and enter a timeless place.

After two hours, I walk back to my car, soaked to the bone and another two quarts of berries in my hand. I dream of what I’ll make with them and of the next day’s picking adventure. 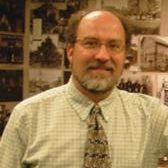 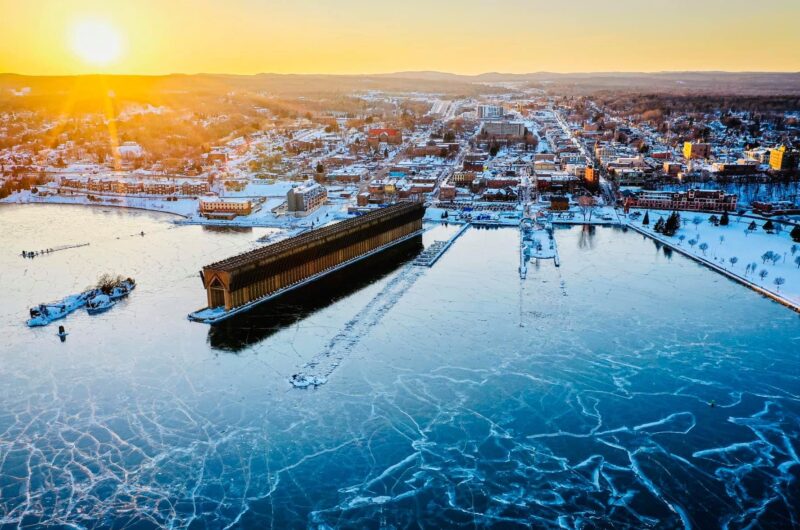 The UP Should Embrace Winter in 2020 to Prevent the “Twindemic”