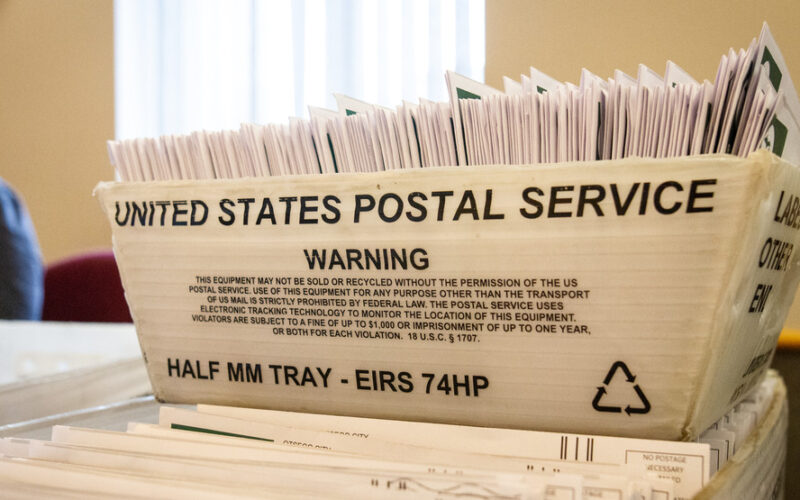 More to come on this increase in absentee ballot applications in the Upper Peninsula.

Does the increase mean a larger voter turnout in this presidential election year? Will it change voter trends and behavior? Too early to tell, but worth monitoring.

Whisperers tell us that MTU is urging/encouraging veterans to apply for jobs at MTU. They tell us that veterans should be urged to check out the MTU website. Urge your veteran family and friends who are job hunting to check it out at www.mtu.edu.

Food Banks in The UP and Food Insecurity

Last week we reported on the large turnout (230 cars) for the mobile food bank for veterans in Rapid River.

We have been hearing about many many food banks popping up across the UP for veterans and local residents to help with the high level of food insecurity for families and individuals.

If you know of an upcoming food bank in the UP, let us know and we will post it on Rural Insights.

UP Universities and COVID Containments

LSSU, NMU, MTU and FU (according to reported COVID cases on campuses across the state) are reported to be having a better containment rate when compared to other campuses downstate.

Congrats to the campus communities throughout the UP and to the local public health officials for their efforts and coordination.

“On September 13, 1970, the New York Times Magazine published an essay by the economist Milton Friedman titled “The Social Responsibility of Business is to Increase Its Profits.”

The op-ed piece said: “What once had been an organizing philosophy heavily influenced by Mr. Friedman’s focus on profits for shareholders has since been replaced with one that espouses “a fundamental commitment to all of our stakeholders” — not just shareholders but employees, suppliers, customers and affected communities. This move was seen as a tipping point for corporate governance by some observers and a cynical public relations ploy by others.

“The question in 2020 is: What exactly does it mean to be in favor of all stakeholders?

“Andrew Ross Sorkin then posed questions to a number of corporate CEOs. Among the CEOs was Howard Schultz who lived in the Upper Peninsula while a student at NMU.

“Howard Schultz, NMU BA 1970, emeritus chairman of Starbucks was asked “What does it mean to say that ‘business’ has responsibilities?” responded:

“I’ve asked this question since opening my first coffee shop in 1986. My answer, a rebuke of Friedman’s single-minded focus on profits, appeared in our company’s original mission statement: “We wish to be an economic, intellectual and social asset in communities where we operate.”

“We would do this not at the expense of profits, but to grow them. If Friedman had balked, asserting that Starbucks could have performed even better without these “socially responsible” activities, I would have told him what I told an institutional investor who wanted me to slash health care costs during the Great Recession, or what I said to a shareholder in 2013 who falsely claimed that Starbucks’s support of gay rights hurt profits: If you feel you can get a better return elsewhere, you are free to sell your shares.

“In 2013 I stood in front of Starbucks shareholders and posed this question: What is the role and responsibility of a for-profit company?

“Friedman’s flawed answer is not his legacy. His legacy is the question itself — which today’s leaders must answer with a renewed commitment to balancing moral purpose and high performance.”

“Starbucks’ initiatives included providing part-time baristas with health care and tuition-free college education; volunteering in neighborhoods; talking openly about racism; and helping impoverished youth find first jobs. The ethos fueling such efforts- that companies have a responsibility to enhance the societies in which they flourish- was integral to Starbucks ability to employ great people and attract customers, which in turn drove a 21,826 percent return to shareholders between 1992 and 2018, the year I stepped down as executive chairman.”

Quotes (That make us go hmm)

“Silence can be as deadly as violence.” Former President Jimmy Carter.

“Calling it your job don’t make it right.” The words of Paul Newman in the movie Cool Hand Luke.

“Luck is everything, but you have to make your own luck.” David Rubenstein.