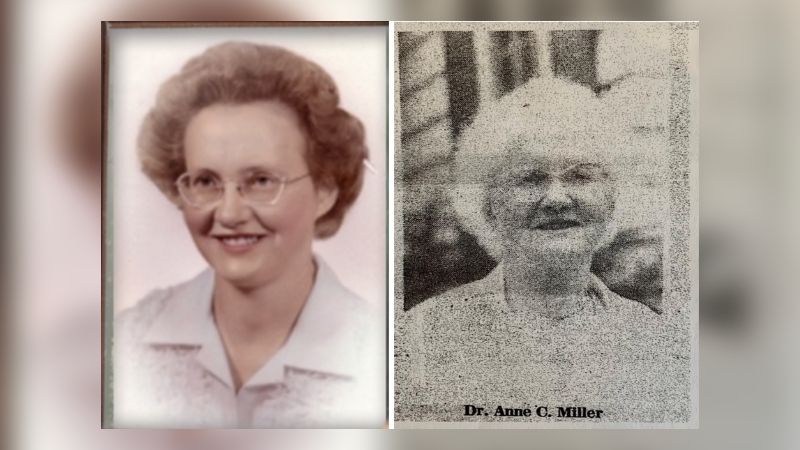 March is Women’s History Month! The Upper Peninsula has been home to hundreds of remarkable women, many of whom accomplished great things without much recognition in their lifetime.

One of those amazing women was Dr. Anne C. Miller (1912-2008) of Crystal Falls. She was the first woman doctor to open a practice in the U.P.

Dr. Miller grew up in the small town of Pennington, New Jersey. She graduated high school there in 1932, and then attended what was then known as the Kansas City College of Osteopathy & Surgery.

“There were seven of us girls who entered medical school that year,” she recalled, “but only two of us graduated [in 1940]. Years ago, the men in medical school always bragged about how they ‘got rid’ of the women who tried to become doctors. But I didn’t have any problem staying with the studies.”

After obtaining her medical license, Dr. Miller ended up in Crystal Falls on somewhat of a whim. “I wanted to practice in a small town and made a list of them,” she said. “Funny thing, Crystal Falls wasn’t on my list! I stopped there on my way to explore an opportunity in Iron River and spent the night in the Crystal Inn. I noticed how neat and well cared for the home was. The depression was over, and things were good again in Crystal Falls.”

“The night clerk asked me why I was in town and encouraged me to stay in Crystal Falls,” she continued. “In the morning while I was eating breakfast, another fellow told me there was only one doctor in town and encouraged me to stay also. This was in April of 1942, and that September I opened my practice above Hammerbergs Drug Store, which had previously been prepared for a doctor who never arrived.”

The U.S. entered World War II the year before Miller opened her practice in Crystal Falls. Wartime meant things were tough for people, and she helped where and how she could. She provided free physicals and shots for children at an annual clinic, serving as many as 70 children on VJ Day, August 14, 1945. She also made regular visits to the Alpha and Amasa high schools where, in addition to performing exams and check-ups on the students, her regular patients could come and see her.

Her many years of practice were filled with a variety of unexpected challenges. She remembered her first year as a primary care physician in the area and having difficulty communicating with the large population of Finnish residents. “I had to use an interpreter at first,” she explained. “I almost quit that first year, but this wonderful lady said to me, ‘What would we do without you?’ and I knew that I was needed here.”

Dr. Miller’s primary business was home visits, and her patients could always count on her to get to them, even in the most remote areas of Iron County. “Very few people had phones in those days,” she remembered, “and in an emergency, they would have to travel to their nearest neighbor with a phone.”

She recalled one night making a house call in Mansfield (a small mining village about eight miles from Crystal Falls) and being able to reach out her car window and almost touch the abundant deer and people swinging their lanterns to show her the way to the home of the family in need.

The rural nature of the communities she served often made for demanding days. Once Dr. Miller was called to deliver two babies at the same time, one in Amasa and the other in Alpha, locations that are fifteen miles apart from each other. She joked, “That time, the babies cooperated and waited their turns to enter the world.” She was able to make the arduous trek between the communities in time to deliver them both!

Long distances weren’t the only challenge for her rural practice; the harsh U.P. winters also complicated her job. Dr. Miller recalled getting stuck many times when her car couldn’t make it up the snowy hills of Crystal Falls.

“Winters were bad. When it was 20 below zero and I needed a push to get my car started, I would walk across the street and get some men to give me a push–they never refused. And Joe Sartori, God bless him for putting chains on my car so I could make it up the big hill!”

Dr. Miller was known for not only having the right cure for a variety of illness and expertly delivering babies, some of her patients also remembered that she provided services above and beyond the call of duty. One former patient recalled having her ears pierced by Dr. Miller.

Dr. Miller made house calls for her entire career, retiring after 50 years of practice. She still saw patients on a part-time basis in her retirement, making her last house call at age 85 in 1997. She passed away in 2008.

She was beloved by her community and did her work quietly, never receiving much recognition for her accomplishments in her lifetime, though she was named “Woman of the Year” by the city of Crystal Falls in 1990.

Her enormous community impact can still be seen to this day in the hundreds of former patients, some of whom still credit their good health to the diligent care of the first independent woman doctor of the Upper Peninsula: Dr. Anne C. Miller.

(Quotes from Dr. Miller from “Through the Years: Wonderful Women in Iron County” by Audrey Ridolfi).