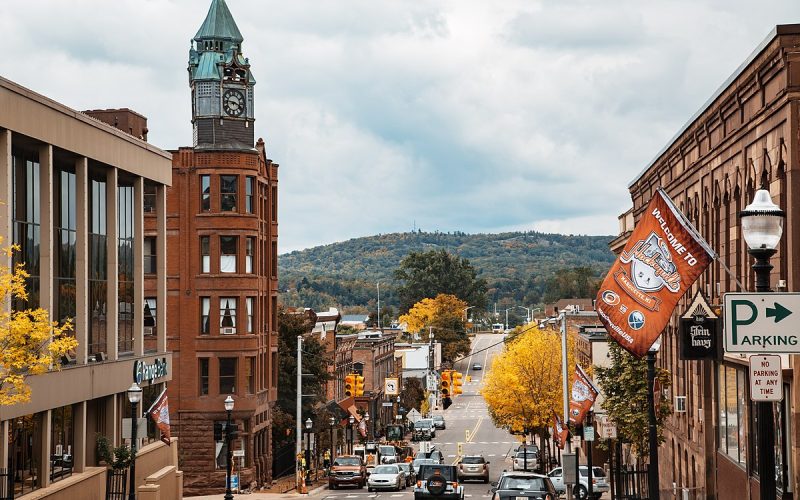 Recent structural economic changes in the US economy have led some observers to argue that the country is evolving into two separate entities: one rural, the other urban.

Rural areas, they suggest, are falling behind large metropolitan areas in terms of job and income growth, with some researchers suggesting that this widening gap is leading some rural residents to resent their urban counterparts (see Katherine Kramer’s study of Wisconsin in The Politics of Resentment).

Rural areas’ traditional employers such as forestry, mining and farming continue to shed labor as a result of gains in worker productivity and competitive pressures. Since 1982, the number of Michigan farms has declined by over 10,000, while the number of persons employed in mining has fallen steadily for decades.

In Marquette County, mining employment has been cut in half over the past thirty years due to the Empire mine closure and productivity gains. In many instances, lower-paying service sector jobs end up replacing these and other jobs. In turn, income growth falters and people move away to find employment elsewhere.

Upon closer examination, however, the situation might not be so clear cut. This article explores the degree to which there is a clear rural-urban split in the state by comparing the economic and demographic performance of the UP’s 15 counties between 1989 and 2019 with a sample of metropolitan counties from ‘below the bridge.’ The data were compiled from Research Division sources at the Federal Reserve Bank of St. Louis and the US Bureau of Labor Statistics.

Population Change: Over half of the UP’s counties lost population between 1989 and 2019 (Table 1), as a result of in-migration to the region and the birth rate failing to offset a rise in the number of deaths from an increasingly-aged population. 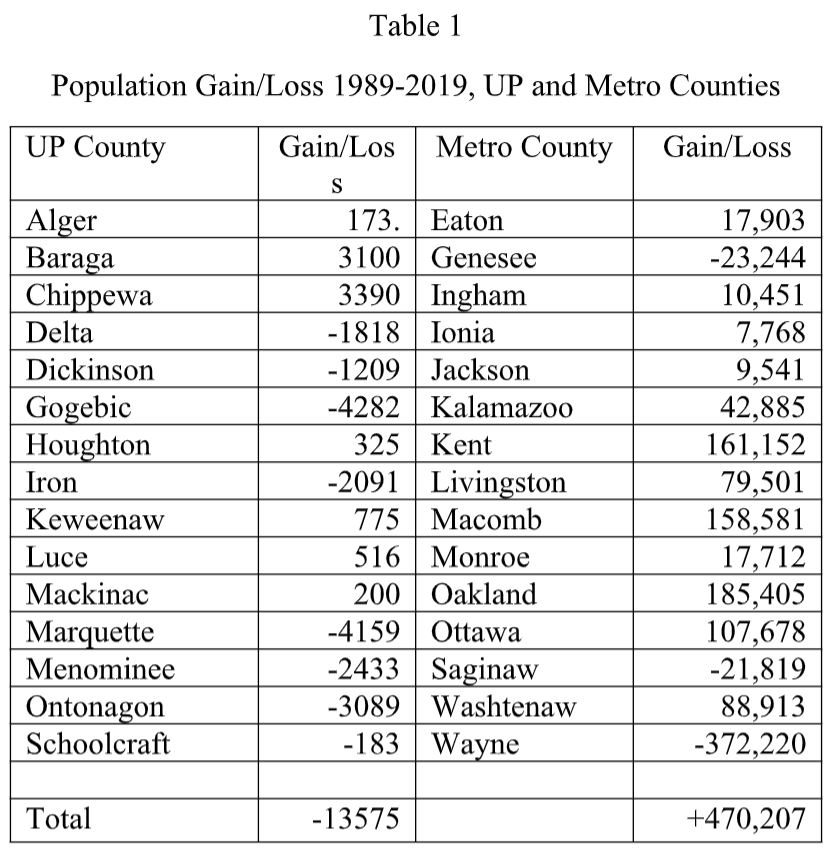 Although the UP lost population, three metro counties also experienced population losses (Saginaw, Genesee and Wayne) due to the faltering fortunes of the auto-dependent cities of Flint and Detroit. In short, the evidence of a widening urban-rural demographic divide is mixed, with both rural and urban counties experiencing population growth and declines.

Employment: Despite the UP’s population decline, the total number of persons employed in the region increased by 6,100 persons, or 6 percent (Table 2), with Marquette and Chippewa experiencing the largest gains. Ontonagon had the largest employment drop due to the 1995 White Pine copper mine closure. 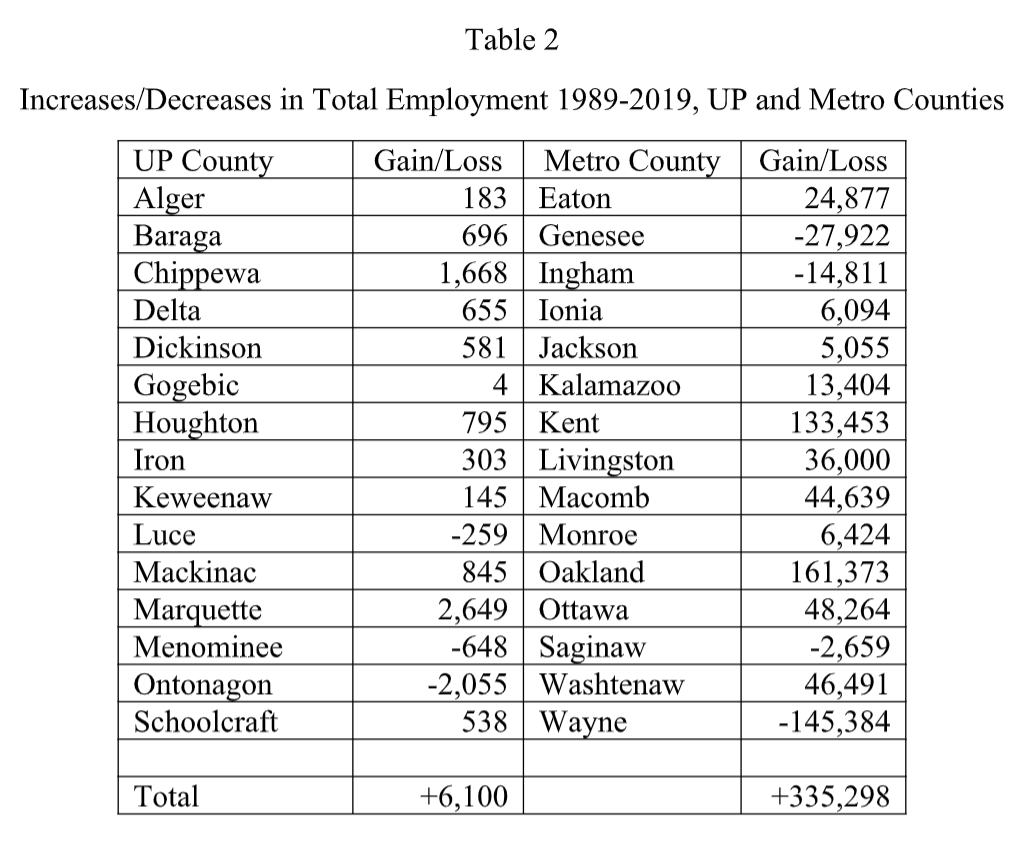 In sum, the evidence of a widening employment gap between urban and rural Michigan is once again mixed, with metro counties as a whole outperforming the UP in job creation. Yet, metro areas are not immune to job losses, most notably in Wayne and Genesee Counties. 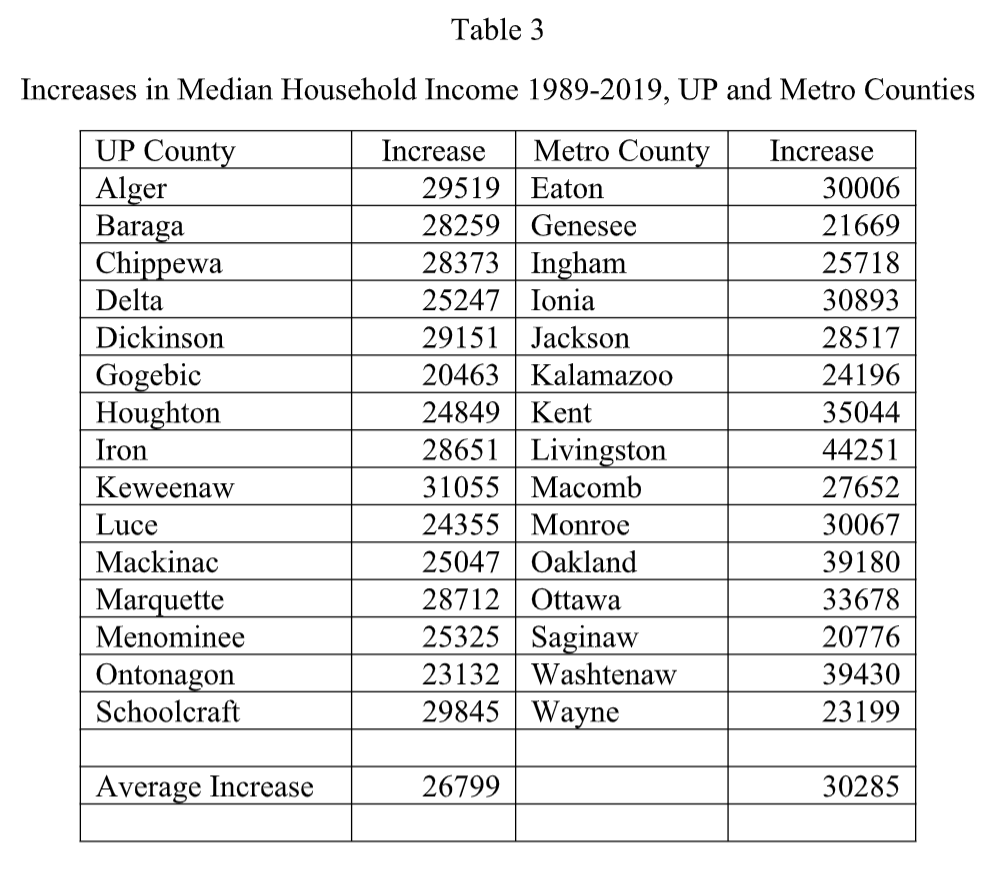 On the surface, this difference is suggestive of a widening rural/urban income gap, however, an analysis of individual counties reveals a more complicated pattern, with some rural counties exceeding the income gains of their metro area counterparts and vice-versa. The evidence of a widening income gap between urban and rural areas is once again mixed.

Poverty: In 1989, the average poverty rate for the 15 UP counties was 13.8, the equivalent figure for metro counties was lower at 9.7. By 2019, the UP’s rate had inched up to 14 percent, while the average rate for metropolitan counties had increased to 12.1 percent. These data indicate that the gap between the UP and metro county poverty rates narrowed due to an increase in metro county poverty, which is contrary to the proposed urban-rural split.

But some metropolitan counties, most notably Wayne, Genesee and Saginaw, have experienced even more significant job and population losses, as well as increases in poverty, as they continue to experience the long-term effects of deindustrialization. At the same time, there are metro counties that provide evidence of a widening gap in economic conditions between rural and urban counties.

Livingston County, located between Detroit and Lansing, is illustrative: between 1989 and 2019 population increased by 70 percent, total employment more than doubled, median household income went from $43,576 to $87,827, and its poverty rate was largely unchanged at 4 percent. These accomplishments are in marked contrast to both the UP and less fortunate downstate counties.

The distinction between urban and rural is insufficient to contextualize a complex economic reality. Uneven development, where some regions are favored over others in terms of attracting investment and people, is a feature of modern economies. In Michigan, some metro counties are dealing with divestment, while others enjoy ‘boom times.’

A similar phenomenon is evident in the UP, where some counties are experiencing long-term economic decline and others modest growth. Indeed, it might surprise some UP residents to learn that they share some economic similarities with their downstate counterparts.