The UP at a Crossroads: Beyond the 2020 Census Results 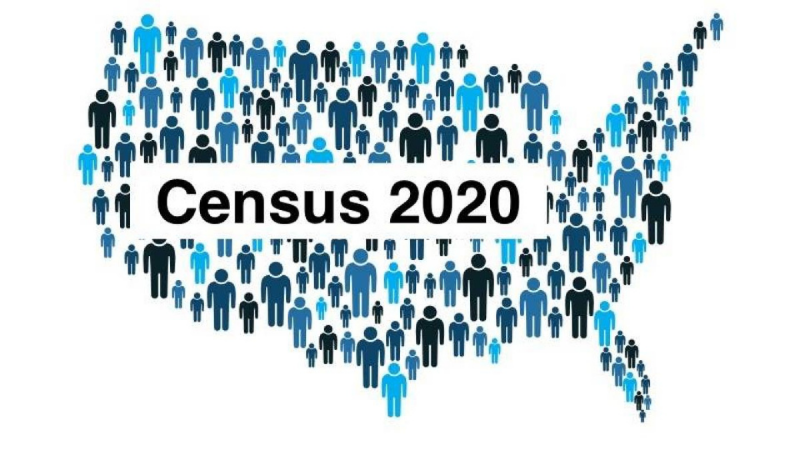 Earlier this year, the US Census Bureau announced its 2020 Census results.

Michigan’s headlines: between 2010 and 2020 the state’s population grew by about 200,000 people, with much of the growth concentrated along the Lower Peninsula’s Lake Michigan shoreline.

The CEO of InvestUP, a regional economic development agency, commenting on the census results noted to Mlive: “It’s not sustainable. It’s something we need to find a course correction for to have any chance to thrive.”

The issue of population decline is not unique to the Upper Peninsula–rather, it is a feature of most rural areas in western industrialized countries. The decline, or depopulation, is driven by a falling birth rate, a lack of in-migration and long-term changes in industries that have historically underpinned rural economies, like agriculture, forestry, and mining.

Simply put, fewer people are needed to work in these industries, and with fewer locally available jobs people leave rural areas to find work in cities. In the past, this outmigration was offset by high birth rates, but this is no longer the case; birth rates are falling while an aging population drives up deaths.

The net effect of these processes is population decline.

The remainder of this article provides an overview of the UP’s 2020 census results and examines the principal drivers of the region’s population change: the birth rate, the death rate, and migration.

Rural depopulation has been occurring in the UP for a long time. The peak population in eleven UP counties occurred prior to 1951 when the local resource-based economy was booming, which drew immigrants and internal migrants to the area.

The remaining counties’ losses were 5 percent or less. The largest absolute population loss (2047) occurred in Gogebic County and is tied to the 2018 closure of the Ojibway Correctional Facility in Marenisco Township. The facility employed about 200 workers and housed approximately 1100 inmates; in Michigan, inmates are counted as part of a county’s population. 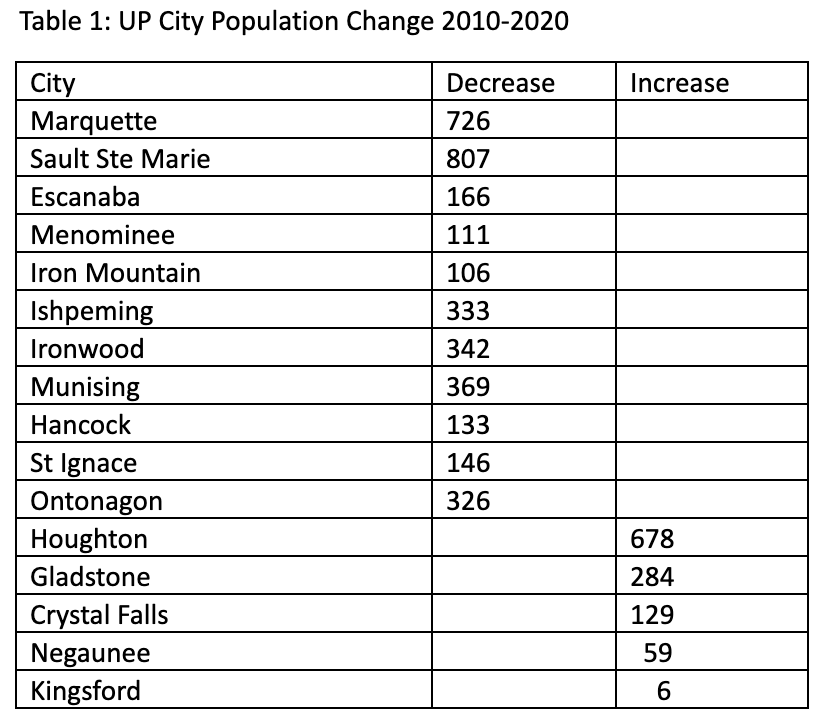 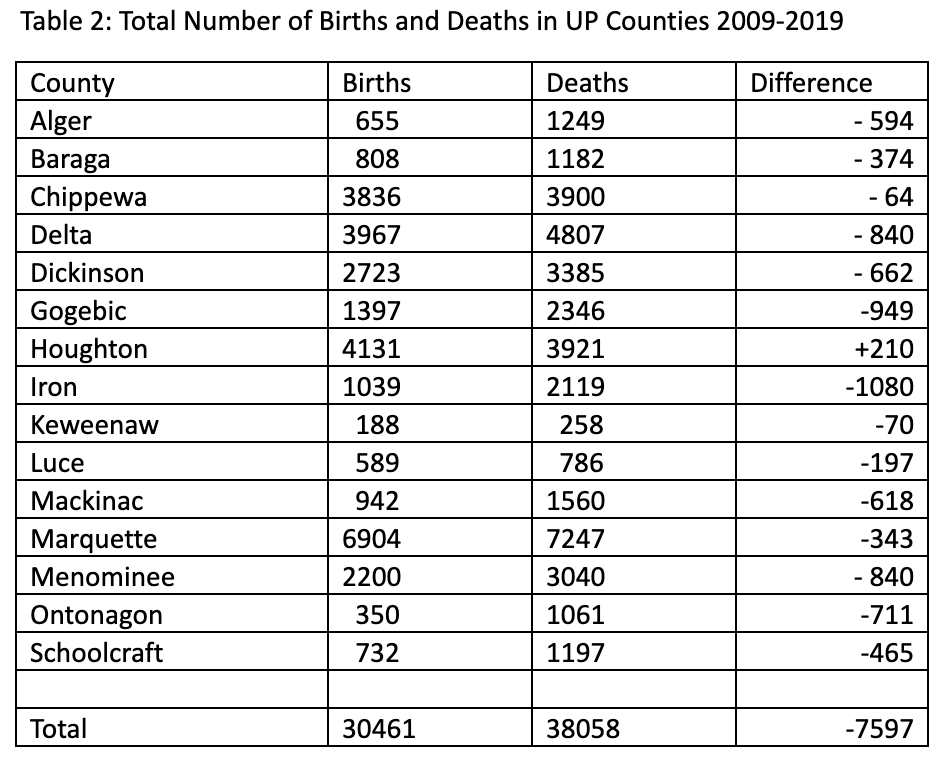 According to data from the Michigan Department of Health and Human Services, between 2009 and 2019 the number of births for the 15 UP counties amounted to 30,461, while the number of deaths was 38,058, a difference of 7597. These differences can be seen at the county level.

Iron County, for example, located along the Wisconsin border, had over a thousand more deaths than births during the ten year period; in Gogebic County the figure was 949. In Marquette, the UP’s most populous county, the number of births amounted to 6904 while the number of deaths totaled 7247, a deficit of 343 persons.

The only county where there were more births than deaths is Houghton: the same county that experienced a population gain between 2010 and 2020.

The discrepancy between births and deaths is unlikely to be easily rectified given the long term decline in the average number of children a woman has in her lifetime–a figure referred to as the fertility rate.

The CDC reports a current rate of 1.6, considerably below 1960’s 3.6. A fertility rate of 2.1 is required for a population to maintain its population from one generation to the next.

Looking ahead, the UP’s aging population will continue to push up the number of deaths. The median age in Iron, Keweenaw, Mackinac, Ontonagon and Schoolcraft counties is over 50, while only Houghton (33.0) and Marquette (39.1) have values below 40.

The other means of increasing population is to attract people to settle in the region. The rise of remote working means people who formerly lived in the UP and moved away because of lack of employment could be targeted by municipal projects that would facilitate their return, including increasing broadband access.

Some states offer incentives; West Virginia, for example, pays people $12,000 to relocate to the Mountaineer state under its Ascend WV program. Ireland has an ambitious 5-year plan to decentralize 20 percent of government employees to 400 remote worker sites in rural areas.

Without an ambitious effort to attract newcomers and an accompanying increase in the tax base, it will be difficult for local governments to maintain existing services, which in turn will make it difficult to retain existing residents, leading to a further downward spiral in the region’s population.

Houghton County’s population growth shows that population decline is not inevitable. Its growth is linked to the area’s successful efforts to attract and develop new high tech businesses through the Michigan Tech Enterprise SmartZone that have added hundreds of new jobs.

Marquette and Sault Ste Marie have launched similar ventures–time will tell if they yield comparable results. Without strong leadership from the state government and other institutions, counties will be severely challenged by the forces of population decline in the next decade.